For 25 years Brigitte Lochardet has given all of her grapes to the Maison Joseph Drouhin. Armand Heitz, the next generation, completed his oenology studies in 2011, started to recover his mother's vineyards and converted them through complete biodynamic practices and completed his first vintage in 2013, led by consultancy from the oenologist Ludovic Pierrot who spent eight years in the legendary Domaine Leflaive, working alongside Anne-Claude Leflaive, the matriarch of biodynamics in the Cote d'Or. Ludovic actively assists Armand in its plan to bring its 5 hectares of vineyards into production in three stages. He made five wines in 2013, a total of eight wines in 2014 and will bring the last two bottled vineyards in 2015. The parcels produced by Heitz-Lochardet are Pommard, Volnay, Chassagne-Montrachet, Meursault and Chevalier-Montrachet Grand Cru as well as a small amount of Bourgogne Rouge and Blanc. All the wines of Armand are whole cluster fermentations because they firmly believe that the essence of a wine derives from the totality of the vine. Every component of the vine, from the roots to the leaves, to the stems, to the skins and to the pulp, plays an important role in a living wine.
The Winery 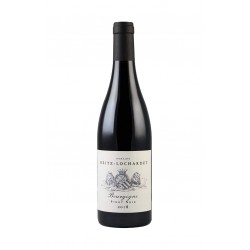