Enzo Guglielmi Farm, Rossese di Dolceaqua wine. In 1839, on the hills of Soldano, Poggio Pini, the winemaking tradition of the Guglielmi family began, which has continued for generations to this day.

The winemaking tradition of the Guglielmi family begins with Giandomenico Guglielmi, born in 1839, and was then continued by grandfather Giovanni, father Dante (who particularly enlarged the company) and finally by Enzo.

Until 1965 the Rossese was always sold first in barrels and then in demijohns. From this date Enzo Guglielmi decides to go to the registerThe company was born on the Soldano hills at an altitude of 250 meters. facing south-east where the "Poggio Pini", a production area of excellence, protrudes. On these arid, steep, rocky soils, cultivated in terraces but with strong viticultural vocations, where our ancestors have lavished energy, effort, sweat and sacrifices, Rossese di Dolceacqua is born from whose careful selection of the grapes the Superiore is obtained. market needs and to create a customization of the product that offers a better guarantee of quality. The introduction of the bottle on the market immediately made its way on the spot and then expanded on the regional, national and international market, where it has received many awards.

Superiore is qualified by the disciplinary when it exceeds 13% vol. aged for one year, then put on the market from November 1st of the year following the harvest. In order to obtain this great product, which not all vintages can have, a careful selection is made of well-ripened grapes, from old plants with little production, in particular and well exposed soils. Of course, the utmost attention is essential in the care before the vineyard, in the cellar and from there until the moment of bottling. 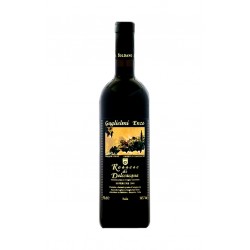